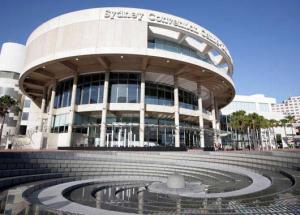 The perfect venue for meetings, conferences, exhibitions and special events, the Centre offers over 30 flexible meeting rooms, ranging from smaller spaces suitable for events for up to 50 people, to an auditorium accommodating 3,500. It also features six exhibition halls and offers a total exhibition space of 30,000 square metres.

The Sydney Convention and Exhibition Centre is home to many of Australia\'s best business events and conferences, making the most of its outstanding location.

The Centre hosts an average of 600 events a year including:


Significant events held at the centre in 2010 and number of Delegates:

The Australian International Motor Show is the largest public exhibition in Australia and in 2010 attracted 140,000 people. It occupies all six exhibition halls and the promenade area in the Centre. This show is held in Sydney biennially.

The Sydney International Boat Show occupies all six exhibition halls and the promenade area in the Centre, spilling out into the Darling Harbour precinct and using the Cockle Bay Marina. In 2010, the show attracted more than 80,000 visitors, taking up a total of 27,200 square metres of exhibition space as well as having 241 vessels on the marina.

Held bi-annually at the Centre, the Reed Gift Fair attracts an average of 800 exhibitors, and occupies all six exhibition halls and the promenade area in the Centre.